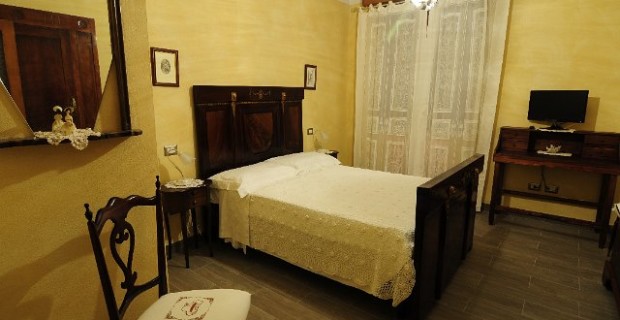 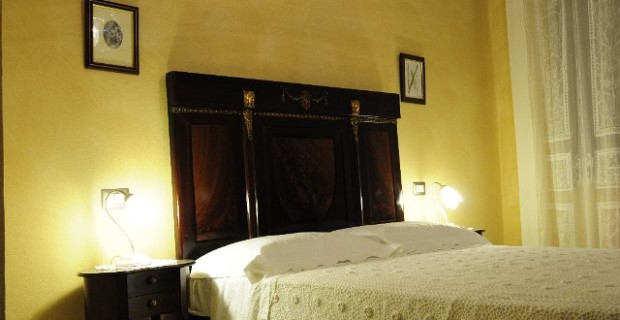 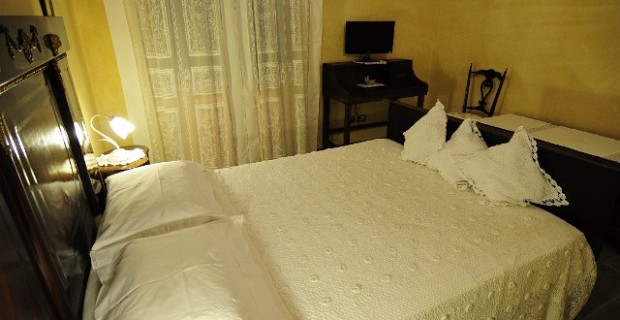 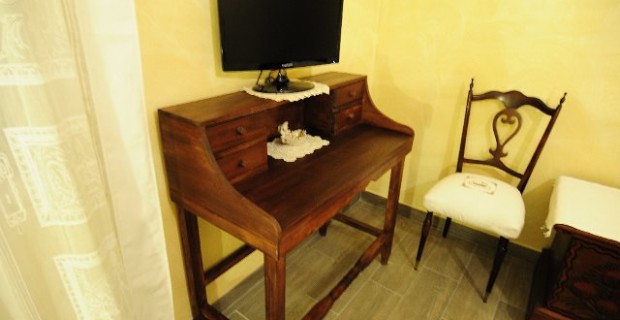 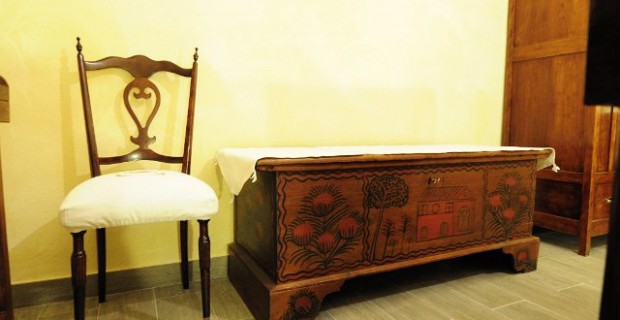 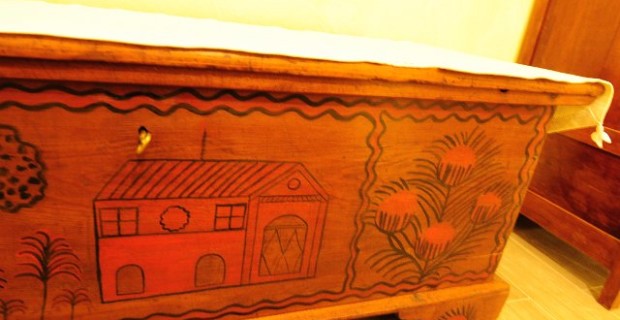 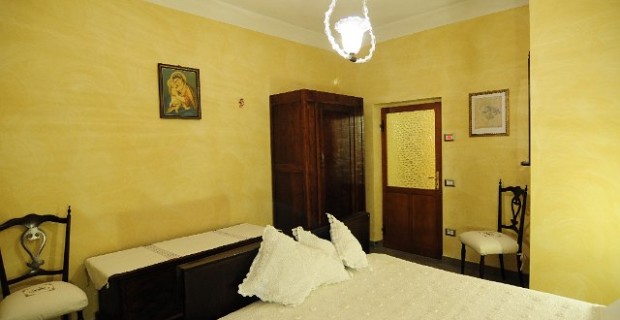 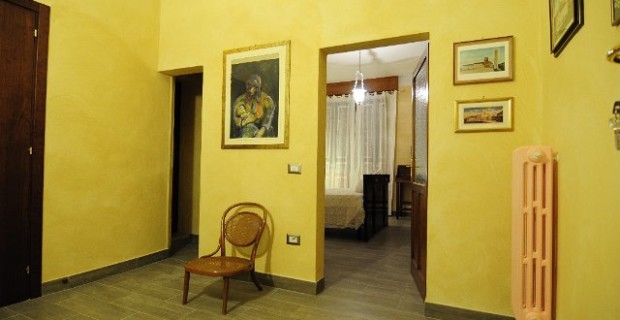 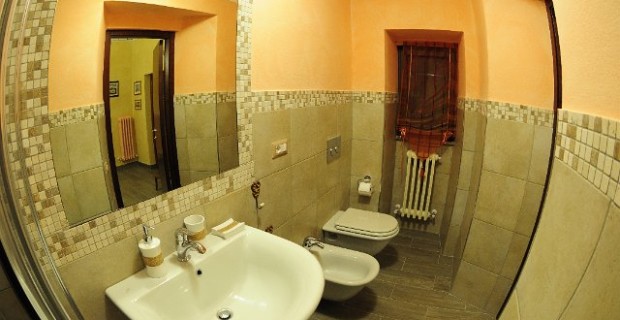 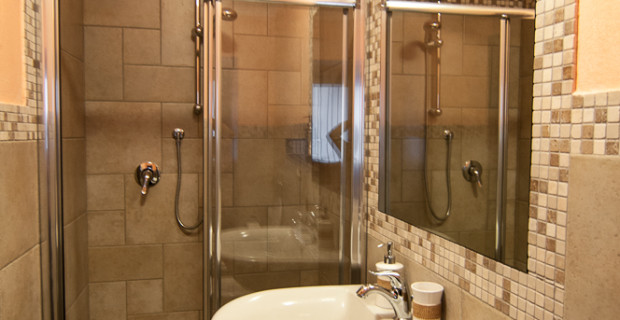 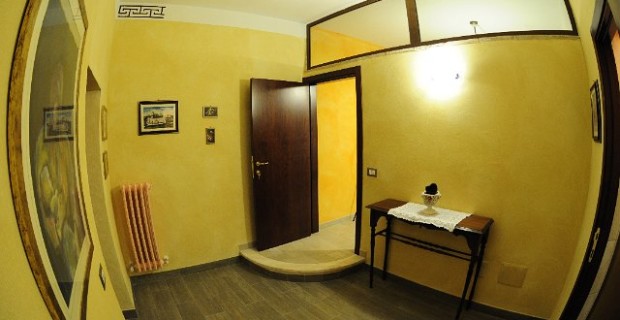 The chromatic tones of Aleandri rooms evoke the color of the brick, such a dear material to Ireneo. The decorations evoke Nineteenth-century tastes, the period in which he lived, taking up the geometric pattern of Feronia theatre stalls. Tere is some original forniture dated end Nineteenth and first half of Twentieth Century, such as the bed, the chest, the chandelier and some ornaments made by the descendants of Ireneo, also artists and decorators in town, although less known than the famous architect.

The room can accommodate up to two persons and is furnished with a 140 cm old-style double bed. It is possible to add a cot for a child up to 2 years of age. There is a small anteroom and of course a private toilet with shower.

The windows are facing the house garden, therefore this is the most intimate room.

The price for the overnight stay is 40 Euro if used by a single person and 60 Euro for two persons. Children under 2 years of age can stay free of charge. It is possible to agree special conditions for a prolonged stay or for company vouchers. In case of minimum 3-overnight stays, we offer you free of charge tickets to our local museums or, alternatively, a free-of-charge cooking lesson of grandma Bice.

Our guests can enjoy their stay also in Septempeda living room where you find books to read, tourist information, board games for children of any age! When the sun is shining, you can enjoy city life from the balcony overlooking viale Mazzini. You can also use the kitchen by yourself with a surcharge of only 10 Euros a day.

Above you find a slide show of Aleandri room and, in the home page, also the common rooms in the B&B.

For further information please don’t hesitate to contact us at info@dasugari.it or using the forms in this web site. Our telephone number is +39 333 1459849.

Here below some information about Ireneo Aleandri:

Ireneo Aleandri (1795-1885), neoclassical architect from San Severino. He studied in Rome at the Accademia of San Luca, managed by sculptor Antonio Canova at that time. Aleandri’s long professional activity can be divided into three phases. In the first period, from 1819 to 1833, Ireneo lived in San Severino, where he also managed the glass factory of his family. Some of his most significant works were made in this period, such as San Lorenzo Arch, Margarucci palace, the theater today named Teatro Feronia, San Paolo church, San Michele church and the clock tower. During this period Ireneo designed and manufactured Sferisterio arena in Macerata, considered his masterpiece and one of the most amazing Italian architecture works of the Nineteenth Century. Between 1833 and 1857 Ireneo was chief engineer in the town of Spoleto, mainly dealing with roads, railways, waterworks and bridges. Among these, the grandiose project for the viaduct of Ariccia known as the last infrastructure of this kind built in masonry. His other important works in engineering were the Darsena waterworks in Spoleto, the railway line Ancona-Rome for the stage between Foligno and Orte and the internal ring road of Spoleto, being still today the main town road. Other important projects in this period were the Ventidio Basso Theatre in Ascoli Piceno and the new theatre in Spoleto. He also designed the new facades for the collegiate church of Otricoli and for the church of Santa Maria delle Grazie, better known as the Sanctuary of San Pacifico in San Severino. Ireneo spent the last period of his life in Macerata, where he moved in 1857 to comply with the last will of his uncle Nicola Niccolai, who appointed Ireneo as his heir, so he was almost completely absorbed by the administration of the conspicuous estate. However, during this period he planned the town cemetery of San Severino and the theaters in Montelupone, Sant’Elpidio and Pollenza. Ireneo died in Macerata in 1885 after the city had given him a gold medal to celebrate the results achieved in his long and successful career.